Google Launches Way to Fight Back Against Scrapers

Posted on March 5, 2014 by Nathanael Vanderkolk

If you’re fed up of scraper sites stealing your content, you’ll be pleased to know that Google now has a way for you to report them. No one’s quite sure exactly what action will follow, but hopefully it will be positive for honest content creators and publishers.

If you monitor the web for copyright infringement using Google alerts or some other system, you’ve probably found part or all of your web content cloned on other sites.

If this happened to you were probably victim of a scraper. Software programs scan web pages and rss feeds, extract sections of relevant content and autopost it to the scraper’s blog.

It’s a big problem. Completing and filing a DMCA take down request with the offending site is cumbersome and time consuming. In any event, anyone so underhand as to scrape is unlikely to heed to a request for its removal.,

It’s especially annoying when the site with the scraped text outranks your original or even knocks your site out of the index.

This is not a new issue. Google introduced a scraper algorithm intended to deal with this issue in January 2011. This new algorithm was intended to make sure that scraped sites didn’t rank well.

However, in 2011, Google was flooded with complaints from webmasters who found that scraper sites were outranking them following the Panda update. Google then urged those affected to get in touch. They now seem to be doing it in a more structured and, hopefully, more committed way. 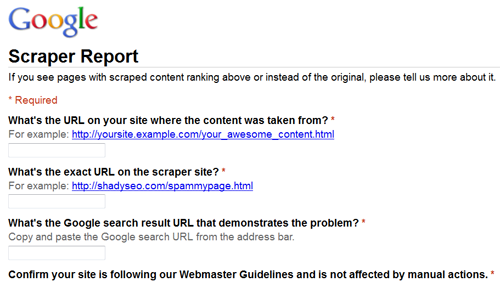 Matt Cutts announced his latest approach in a tweet last month. Head over to https://docs.google.com/forms/d/1Pw1KVOVRyr4a7ezj_6SHghnX1Y6bp1SOVmy60QjkF0Y/viewform to view the Scraper Report form, which is intended to allow webmasters to submit details of sites that have copied their content. 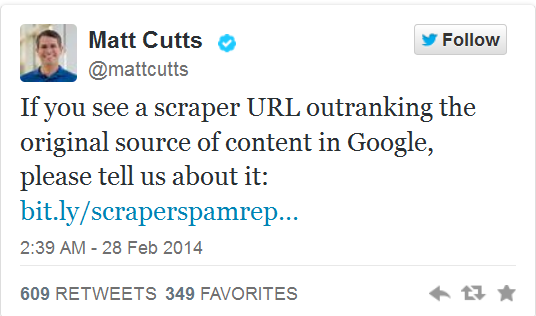 It’s very straightforward. Just fill in the URL on your site where the content was copied from, the site of the scraper site displaying the scraped content, and the search engine result URL that proves the scraper site is outranking you. You’ll also have to confirm your site meets all the Google Webmaster guidelines before clicking submit.

However, before you rejoice and start imagining all those scraper sites dropping out of the search results, remember that Google hasn’t yet clarified that it will do with your submissions.

Rumour has it that the information will be used to enhance the Google algorithm. Determining how these scraper sites managed to rank well is the first step to stopping the process.

So go ahead and submit; you’ll be making the web a better place. Anything that makes content thieves think twice before plucking other people’s hard work is worth a few hours of your time.